Did you know I recently became a vegetarian?

I announced this proudly at the end of December only to be met with derision from my little brother. This one:

He said, "Why would you have to announce that you're a vegetarian? Why can't you just eat less meat and not be a douche about it, like the majority of the world?"

Well, duh. Because I want to be special. Labels, especially ones you can be self-righteous about, make you special.

Now, never mind the fact that the other day at work, I was craving chicken so badly that I seriously would have hurt someone for a wing. I have a (plastic, butter) knife in my desk and if I'd smelled any chicken, I would have used it. I'm sure this meat thing will stick. I mean meatless thing. Yeah. Besides, all the cool kids are experimenting with meatlessness. Will it make me faster, and thinner, and stronger, and magical? Nah. Will I stick with it? Probably. (Ed: definitely not. Shortly after a draft of this post was written, I fell off the wagon and right into Shake Shack. Je ne regrette rien.)

I said goodbye to my meat days in style, though, with a burger for lunch and combination steak and lobster dinner on New Years Eve. (Ed: goodbye, meat days... see you again in 12 days!) Then, that night to celebrate NYE, hopped up on red meat, I took a 90 minute bikram class. 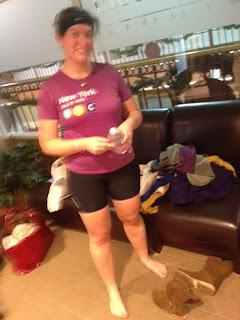 The weirdest thing about this photo is not that it's blurry, but it's that my sister announced, in earnest, "Oh, you're really going to like this one!" after she took it.

On New Year's Day, she and I ran 11 miles in freezing cold weather with 30mph winds wipping at us while snow fell "down" horizontally. Driving home through the snow, she then took this photo: 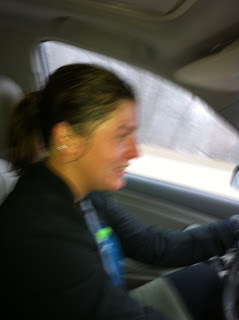 She was also quite proud of this photo. Now, I'm no Mapplethorpe, but maybe my sister isn't, either. (Ed: is it weird that I think, "insert name of famous photographer here" and the only name the voice in my head can come up with is "Mapplethorpe"?)


(Final annoying editorial aside: after Shake Shack, there was Manhattan's first Steak 'n Shake. Then there was the Burger Joint at the Parker Meridien. It's been a great week back in the arms of my dear friend red meat!)
Posted by T at 8:15 AM