Tracy's tried and true method for PRing a race: Evidently, drinking the night before works for me. I PR'd a 15k in December after a night of drinking, and I PR'd a 10m race on Saturday after drinking. Drinking kind of a lot, in fact. I'm not proud. Okay, maybe sort of a little proud. 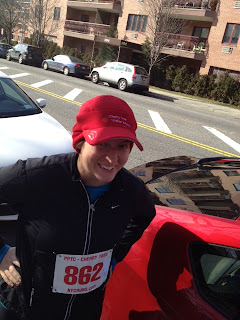 I don't often drink to excess, but I did Saturday night. I finally fell asleep around 3:30am, and when my alarm woke me at 7, I was beat. I brought a magazine with me to the race. I figured, I could always bail and sleep in the back of the zipcar while my friends ran the race, right?

Of course not. Once we got there, I was already awake and alert and not about to waste my registration fee. Good company and a beautiful day? Why not? Emilie and Tara and I agreed to take it as an easy run and not race it. Great decision. 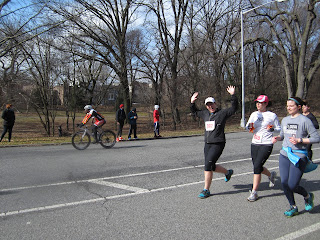 I'd done this race once before, in 2010, and enjoyed it then, too. The course is three loops of Prospect Park (including three times up the notorious hill). There's also a 3-person relay that happens at the same time. Even though the small size and the accompanying relay make for a fast race, it's also a very supportive one. There are spectators on the course yelling encouragement, and never once did we feel like we were alone on the course (or anywhere near it).

We ran, we gossiped, we unexpectedly saw Kim (who was in town from Chicago and who provided the awesome photos). We finished comfortably in about 1:39. Around 8.5 miles in, Emilie and I both confessed that 1:40 was our "super secret goal" - we'd claimed to go into it with no goals, just wanting to take it easy as a long run. Yeah. Haha. 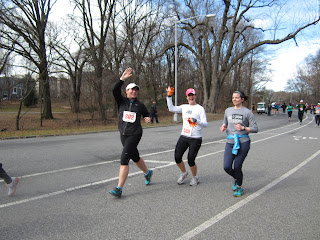 We would have been much closer to 1:40, too, had it not been for the inspiration of a fellow runner. Is there a word to convey "negative inspiration"? This one particular woman had been neck and neck with the three of us the entire race. That doesn't bother me. What did bother me was that she was doing a run-walk, and she was quite obviously using us to pace off of. Walk for a while... Run and pass us. Run fast for a short bit, then walk for a while... Repeat. When she passed us about a half mile shy of the finish, Emilie got a look of determination and said, "NO. This is NOT happening," before taking off. I'm pleased to say that Tara and I also finished ahead of the woman. (But seriously: run your own race!) 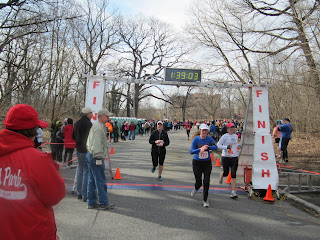 Two small criticisms:
One, my recorded time was the gun time, not my chip time (do we say "bib time" now that b-tags are a Thing?). Crossing the start line was fast, so I'm sure the difference was less than a minute, but... Given that NYCRuns (who was putting on the race) has had issues with timing in the past, I was hoping for accuracy.

Two, the water was served in tiny dixie cups. There were only a couple of water stations on the course (which was fine), but the small glasses didn't provide much water. They even had the tiny glasses at the end of the race - I could have drunk 10 of them, no joke. Except I couldn't have, because the volunteers were having trouble keeping up with the demand for water.

I wonder if I could have done better had I gotten enough sleep or had I raced it. When I went back into my blog archives to find my 2010 race report, I noticed that shortly after the race there was an entry about how much sleep I was getting (in Feb, 2010). Those were the days...


When I got home post-race, I smelled like the most nauseating combination of sweat and stale alcohol. I'd like to say, "never again," but at the same time, I think I found a pre-race strategy that works for me.