This is how I roll

I'm classy as anything, what can I say? If you needed further proof, here it is: a cell phone self-portrait, taken in a public bathroom, beer in hand. Yes, I look like a pirate. 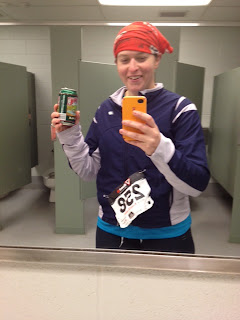 Where did I get the beer? Well, on Saturday, I ran a race.

But let's back up to Friday night, when I tweeted this (NB: I don't technically remember tweeting this):

When Saturday morning came around, I wasn't exactly in peak shape. It was a trail half in New Jersey with my friend Renee - she has a goal of doing a half each month, and she'd recruited me to do this one.

As we later said, it was a pleasant hike, but a crummy run. Yeah. Due to a bathroom incident (as in: there weren't bathrooms), we even started several minutes late. I knew early on that both loops of the course weren't happening, but I tried to hold off. When it was seeming like a half marathon that was closer to 4 hours than it was to 2 (by a fair bit) was in the cards, I knew I had to put myself out of my misery. There was a 10k option to the race, so we dropped out at 8m. I mean, um, we switched from the half to the 10k. 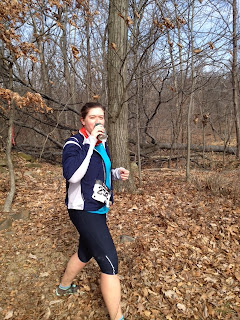 The good news? They were giving beer! Even for losers like me. 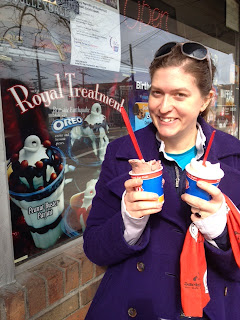 I kind of hate myself for not finishing the race. But I would have hated myself more for walking the whole freaking second loop. It is what it is.
Posted by T at 8:04 AM