I AM A WINNER

That's right: I won a race this past weekend.

Yes, as in first place.
No, I was not the only participant.
Yes, I swear! I really won first place!
Okay, fine: yes, it was handicapped, so I also started first. But more importantly: I finished first.

AND I WON. A prize and everything. (A bottle of Jameson and a hamper of seafood - not too shabby, eh?) 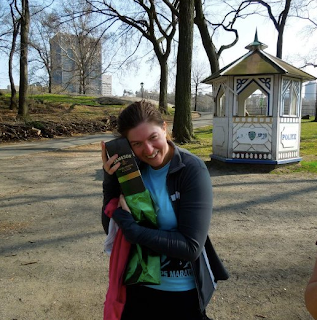 So let me tell you about the psychology of winning. This isn't something I knew anything about until Saturday, but now that I'm a winner, I'm basically an expert and thus I can school you on it. We had our choice of beer or whiskey - I chose whiskey, as it was easier and faster to drink down. As the winner, I stand behind my choice.

I started first, with a two minute lead on most of the competitors and a 10+ minute lead on the speediest two (there were eight competitors total). I wasn't surprised to reach the turnaround in first place, given my lead on the next few runners. Sure enough, they were less than a quarter of a mile behind me when I started up running again. In particular, one of the speediest runners was right on me. (First bit of winner psychology: I very nicely smiled and gave him a high-five so he wouldn't sense that I was out for blood.)

When I saw him that close behind me, I didn't think there was any way to hold on to my pace, especially considering the reality of the situation: the next two miles were rolling hills, and I was drunk as a skunk.

My tongue was lead, I was lightheaded, and I couldn't feel my legs. All I could tell was that my pace had slowed and it was becoming harder to run in a straight line.

When I got to the three mile mark and no one had caught up with me, I began to entertain the idea that maybe - maybe - I could place second. I tried to pick up the pace. By mile 3.5, I told myself that I had less than 5 minutes left and that I just needed to gut it out.

Every set of footfalls I heard behind me became a competitor gaining on me. I didn't dare turn around and look - not only would that be inefficient for my form, but I didn't want him to sense my fear. I didn't even glance at my watch - my arms were for pushing me toward the finish, not anything frivolous like checking my pace. (Besides, you could have told me I was running a 7 minute mile or a 12 minute mile and I would have believed you. Did I mention I was drunk?)

I turned the corner to the finish, charged the last 50 meters, downed a final shot of whiskey, and stopped my watch at 37:12 - a new 4 mile PR by over two minutes.

I was declared the winner, I collected my whiskey prize, and I posed for photos. The world is a different place when you're a winner. People are kinder. They respect you more. They can sense "winner" on you; they know you're special.

There's a small chance that I might have a bruise on my stomach from clutching my Jameson too tightly.

(Photos courtesy of these two lovely ladies.)
Posted by T at 7:42 AM