Many of you have probably already seen this... the May cover of Running Times: 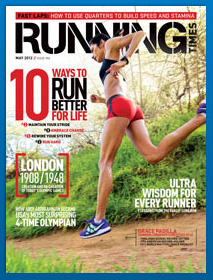 Like one of my twitter friends said, "They're just two round cherries." Or one of the lovelies at letsrun, "I just want to take a bite out of that thing."

It brings up all sorts of feminist thoughts for me about selling magazines by exploiting women (they did not have to shoot her from that angle!). But mostly, it brings up all sorts of uncomfortable feelings within me, causing me to question my sexuality. No, no - what is uncomfortable is that I'm not questioning my sexuality when I look at that photo. I'm very, very confident that I am looking at a very, very hot photo.

But now, what are you doing reading this? Shouldn't you be queuing up your live webcast for the fun run that is this year's "The heat is on" Boston Marathon? Remember: THIS IS NOT A RACE. It is an experience. (That's what they're actually saying.)

Precautions are in place for a race in potentially 90 degree temps. Bandits will not have support; everyone is encouraged to slow their pace down; charity runners (officially "those who have not met the qualifying standards for their age and gender") are encouraged not to run; and anyone who is registered who chooses to not run can instead defer their entry to next year.

Remember two years ago, when registering for Boston was such a clusterfuck? And then remember when last year, they lowered the qualifying times needed and revamped the registration process? And remember this year, when they intentionally allowed people to defer, thus further limiting potential entrants next year? Maybe the number of deferrals will be low enough to be nominal? Maybe. Or maybe next year's registration will be a worse clusterfuck.

Welcome to global warming. From now on, races will be even harder to get into as record heat means fun runs, cancellations, and deferrals. Now, only November/December/January/February races are safe in terms of weather. Soon, we'll all be paying $15,000+ to run the Antarctic Marathon... until the ice caps melt, that is.