I'm not a vengeful person, and I did not write yesterday's blog post in order to cause any controversy. I just happened to spend much of Monday sitting on at my computer watching twitter, and I saw something that I thought that all six of my followers might find interesting.

And then it blew up.

What blew up was not my blog post; it was Gugala's reaction to it. He launched a series of ad hominem attacks against me and against anyone else who had the gall to interact with him on twitter. He said that he was in the clear since any perceived sexism was, well, perceived:


@thedcc See, the thing you have to remember is that YOU think they're sexist. Just because you think something, does that make it so?
— Jon Gugala (@JonGugala) April 17, 2012

He said that those of us complaining aren't his readers because we don't follow the sport (what?). He said that amateur bloggers should "stay in the shallow end."

This is the most confusing to me:


@thedcc god forbid men mention women and sex. You're right. There should be a return to burkas.
— Jon Gugala (@JonGugala) April 17, 2012

(@thedcc is Donnie, and you can read his take here.)

By the end of the day, this happened:

But this is my favorite interaction: 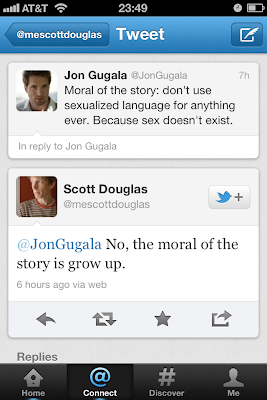