I haven't got time for the pain

Yesterday, I ran the Bear Mountain half marathon. Again. Well, I sort of ran, sort of walked it. I'm not going to say too much about it - the race was hellishly hard, the weather was humid, I suck at running during the (TMI alert) luteal phase, and I got my shoe sucked off by the mud not once, not twice, but three times.

For several miles of the race, the single track course had me stuck behind another runner (I could have passed her but we were running comparably). I had a good long time to stare at her back and contemplate her. One thing I noticed that was interesting: she was wearing compression socks, cho-pat knee straps on each knee, and KT tape on her IT band.

This really got me thinking about when enough is enough. How much pain should running cause, and how far should we go to avoid any pain?

Meanwhile, during my race...

When I finished, I noticed that these were my legs: 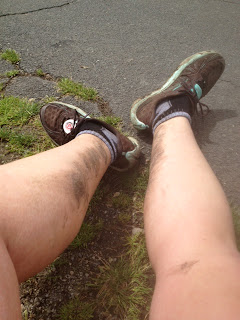 No, that's not me trying to fake like I'm all bad ass and muddy. Instead, it's me showing off a common occurrence: I gently kick the insides of my legs with the opposite foot while I run. Evidently this is what happens when your idea of strength training involves lifting an ice cream spoon (or a beer) to your lips: Running Times tells me that this indicates weak glutes and poor hip extension causing my hips to twist slightly as I push off (sadly the article isn't online, but it was October 2011).

Uh, yeah. Meanwhile, I'll be strengthening my glutes while eating ice cream. As soon as someone tells me how to strengthen my glutes.
Posted by T at 7:44 AM