And exactly what do you think "marathon fresh scent" smells like?

I didn't mean to take a break, but then I did

I'm taking a break from running (and blogging).

I haven't run in a week. And I'm okay with that. And I'm not sure when I'm going to run again. Maybe this weekend? Maybe. Not sure.

The heat stroke came back with a vengeance last Monday when I tried to run after work. And then, even though I stopped running, it started getting worse. It got to the point today where being outside for less than 10 minutes was causing a heat rash to break out on my neck and chest. Running isn't appealing right now.

It doesn't take an advanced degree in medicine or psychology to figure out that it's probably as much in my head as my body. That said, I'm going to ride it out with air conditioning and cold compresses and go back to running (and blogging) when I feel like it again. 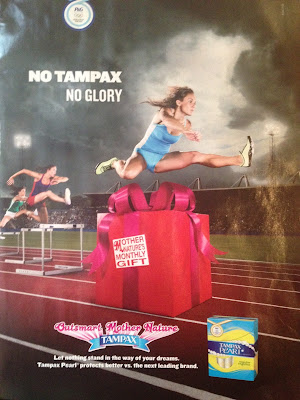 I took the day off from running yesterday to go into deepest darkest Brooklyn in order to sign my new lease. I may - or may not - have followed that up by ordering a t-shirt that says "I hate Brooklyn" from cafepress after drinking the vast majority of a bottle of moscato. 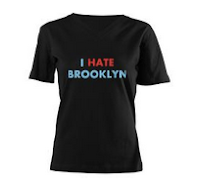 Come August, my usual West Side Highway route will be replaced by loops of Prospect Park.

My typical jaded New Yorker routine will be replaced by an even more jaded hipster schtick.
Irony is dead; long live irony!

I already registered for a 10m race in Prospect Park in August. Shall I now sign up for the Brooklyn Marathon?

__________
Btw, thank you for all of the thoughts and suggestions after my run on Monday. I did an easy 5m on Tuesday as hair of the dog, and I felt much better. I've taken it easy the past few days, making sure to drink a lot of water. So far, so good - let's hope that doesn't happen again.
Posted by T at 10:46 AM 4 comments:

Yesterday I had the strangest thing happen to me, and I need advice/help.

In fact, I contemplated not even writing about it - frankly, because I'm kind of embarrassed. But I don't really know what happened, and I'm wondering if anyone has any thoughts or suggestions or maybe just commiseration.

Yesterday evening, I'd agreed to meet a slightly faster friend for an evening run. The plan was to do a 6m loop of Central Park in his usual 58ish minutes - more of a tempo run for me at this point, but a pace that should be manageable. About a mile in, I realized we were going much too fast for me. I'd had a long day spent mostly in the sun and probably hadn't had enough to eat or drink (I'd felt depleted before I even began the run).

Also complicating things, I don't sleep well in the summer. I think I'm the only person in the world who does NOT sleep well with white noise, so I'm faced with the choice of sleeping in the heat (bad bad bad) or running the AC (too much white noise for me and almost as bad). I wake up most mornings exhausted. I've joked with my friends that I need to start hanging out in hotel bars in hopes of picking up a businessperson and spend the night in the quiet cool of his hotel room. Totally joking. Yeah.

Also, I've had a lot going on lately, including finishing up a huge project for work, finding a new apartment, saying goodbye to a much loved roommate, and accepting that I'm going to have to give up my dog for the year (custody agreement with the ex-boyfriend; at least I get the to keep the shitty-ass cat). It's all together put me in a pretty bad mental/emotional state.

So basically, a perfect cocktail of fatigue, pushing the run too hard, and not dealing well with personal stress. And then...

As we neared Cat Hill, about 4 miles in, I was in a bad way and decided to walk up the hill. As soon as I stopped running, I involuntarily got the chills. My legs nearly buckled and without any thought, I started sobbing. The weird thing is, this wasn't emotional. I was upset, sure, but what happened to me was purely physical. There was no "I'm upset and I'm going to cry" moment; instead, it was like all of a sudden there was just too much of something. Adrenaline? Endorphins? Something bad? It just all bubbled over and I was out of control. I got it together and we ran the last two miles slightly slower, but it happened again when we stopped running at the end.

What gives? Sadly, I can't even blame PMS. I need running as a stress release; I can't have it turn into something that stresses me out (and I'm not a cryer, so crying isn't cathartic for me but instead stresses me out). Any thoughts or advice? At least tell me I'm not alone.
Posted by T at 12:02 PM 28 comments: 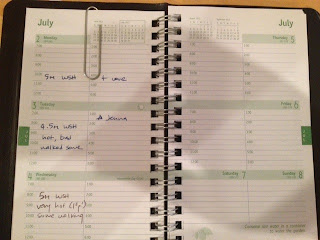 I've decided to eschew online training journals for now. I don't need/want the statistics, frankly. The arbitrary numbers and all of the data just bog me down. I want to run, just that simply - I'm not someone who is motivated by a bar graph or a mileage tally or other quantifications of what to me is a holistic activity. Does that make sense? I contemplated getting rid of my running log entirely, but I want some sort of accountability.

I'll admit some discomfort when I click on my RunningAhead page and see the June/July mileage at zero. I did run in June. I have run already in July. But I know that, and I don't need a website to remind me. When my shoes stop feeling fresh, I'll get a new pair - whether that's 200m or 500m in.

And so yeah I walked during some of my runs this week. Stop laughing at me. That's what happens when you leave for your run between 11am and 1pm on some of the hottest days of the summer so far.

And also? When hipster running logs come in vogue, you can say you saw it here first.
Posted by T at 7:25 AM 9 comments:

So basically, I should actually DECREASE my running some

A new study suggests that, in order to optimize your health, the ideal amount of running is less than 20 miles per week done at an 8:30-10:00 minute mile pace. The doctors consulted also suggest slowing down your marathon pace to avoid greater risk.

In other words, you may have thought that I was just slow, but instead I'm actually a pinnacle of health.

By the way, I got this article from Sage Canaday's twitter feed. Speaking of Sage Canaday, I interacted with him the other day:

Also: in case you were worried about me, I'm on antibiotics now and am nearly 100% better. As a test of this, I ran 5 miles this morning and it was kind of sort of awesome.
Posted by T at 11:41 AM 1 comment: