There, I said it. And it feels really, really good to say it.

I know it's only been two weeks and a handful of runs/bike rides. But I hate it. And I need suggestions on an attitude adjustment.

My old running route along the West Side Highway in upper Manhattan was idyllic. It was quiet, serene, peaceful, and beautiful. It was possible to have a bad run along there, yes, but it wasn't possible to be in a bad mood while there. (I know; I tried it. Without fail, I felt calm when I was there.) The river, immediately adjacent to the path, was picturesque. You were in the city and yet you weren't, all at once. I loved it.

But now my old route is an impossible hour away by subway and I'm stuck running in Prospect Park. And I hate it. I realized why when I was running this morning: it's the outdoor equivalent of treadmill running. The perfectly paved path, the carefully manicured greenery, the loop that twists and turns at just the right casual-yet-completely-planned trajectory... It's manufactured outdoors. Outdoors lite. 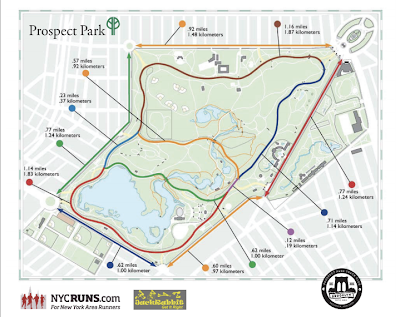 Combine that with its popularity. Moms walking four abreast pushing strollers. Parents teaching their kids how to rollerblade or bike. Runners, walkers, fast and slow, taking up my path. Plus, like its Manhattan neighbor (Central Park), it's a fashion show.

I know I should feel grateful that I live less than half a mile from a scenic, paved running trail. I have an uninterrupted 3.36m loop, and I don't have to run through the streets, stopping at lights and for cars. But instead I feel like a petulant, pouty brat who wants to stomp her feet and shake her fists at the thought of doing another loop of that damned park. I can listen to music to drown out my own boredom, but I don't like to rely on my headphones.