Believe it or not, I really don't like blog drama.

Drama in the "blogosphere" somehow seems even more petty than drama in the real world, don't you think? But yesterday, after my blog post about the upcoming Central Park Marathon, I got a comment on my blog and an email from the race director/head of NYCRuns that I wanted to address publicly. I've already replied to him directly via email, but here is what happened:

Before I posted my post yesterday, I emailed Steve Lastoe. Steve and I have had a mostly cordial professional relationship for a few years, and I wanted to give him the benefit of the doubt and ask him about the date change. Here's my email to him:

I'm having trouble getting the message header to show in gmail, but I sent this email last night at 7:54pm. I usually post my blog first thing in the morning before work, but I held off some to give him a chance to answer. And I waited. I figured he'd seen my email but just didn't have an answer. Fair enough.

I noticed partway through the day that he'd posted on facebook that we'd know the exact date of the race in "mid-December." He'd said in the original email that it would be "the first week of December." Not too big of a difference, but it still suggested to me that there was still just much too much TBD to be collecting race entry fees from this race. In the opinion of this blogger. Who has an audience of, say, 250 readers on a really good day, about 100 of whom are me hitting refresh.

By the time I left work tonight, I had an answer to my email from Steve. Here is his message, in its entirety:

And then here is the comment he left on my blog yesterday:

Honestly, when I got his messages, I was upset. Call me overly sensitive, but it had never been my intention to insult someone whose work I might not always agree with but mostly respect. But then, after I calmed down and reread my post and his responses, after a couple of my cyberfriends also commented on yesterday's post (thank you, Mike and AR), I was kind of bewildered and confused. I hadn't insulted him. I'd disagreed with the way he is running this race, sure. But personally insulting him? Not so much.

So, here is the email I sent to Steve: 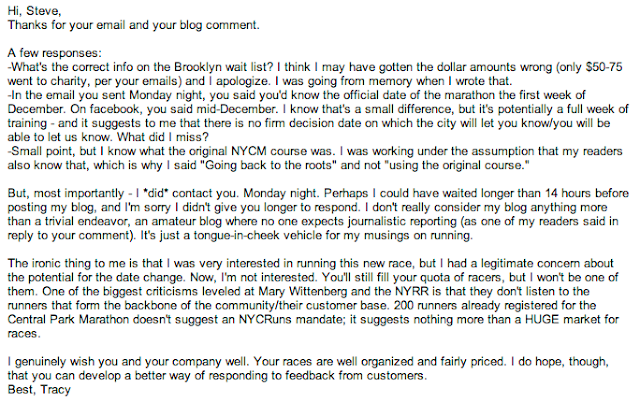 The response: this morning I got a very professional email from another staff member at NYCRuns taking responsibility for the December/mid-December confusion... followed a few minutes later by a very immature, defensive response from Steve (email me if you want me to forward it to you). Again, Steve didn't address any of my actual points in the email (although he did in a second blog comment on yesterday's post), and he ended his email by saying, "If you don’t want to run our races – that’s your choice, but don’t blame our communication skills." (NB: that was the first anyone had said about me not wanting to run their races - it had only been the Central Park Marathon that I had been talking about.)

Let me stress something: I think NYCRuns is a great idea and a good company. I do not have a problem with them or their races. Unfortunately, I do think their Founder and Race Director needs to learn how to communicate better. Less reactionarily.

Coming up tomorrow: I tell you about getting locked out of my apartment after a run and nearly freezing to death and other stuff that is completely not controversial to anyone but me in any possible way.
Posted by T at 7:34 AM