My bike shanked me

What can I say? Everybody else was doing it.
At least that's how I felt, reading report after report of awesome bike rides on super sweet road bikes. Facebook photos, tweets, blog posts. And if everyone else is doing it, why can't I?
I don't have a road bike, but I can soup up my hybrid with pedals that clip, get some cycling shoes, and finally experience the full body cycling experience that is pushing down AND pulling up on the pedal.
If everybody else was jumping off a bridge, would you do that, too, Tracy? I forgot where I read it, but I saw a great answer to that once: yeah, probably. This person reasoned that his/her friends were all intelligent people, and if they were jumping off a bridge there was likely a good reason. Maybe the bridge was on fire?
And that's how I found myself in Prospect Park this past weekend on a nearly empty path, fancy shoes strapped to my feet, fancy pedals fastened to my bike.
And If you know anything about clipless pedals, you know where this is going: the next place I found myself was on the ground. Not immediately, mind you, not the very very first time I clipped in, but within about 10 minutes. I had gone roughly an eighth of a mile. Slowly.
Before I went to the park to try the new pedals, I read a lot about how to practice with them. I loosened the tension on the pedals so it was super easy to release the shoes. I balanced against a wall and did clipped in and out a bunch of times for practice getting used to the feeling. I started with one foot clipped in and one foot not. But no amount of practice prepares you for that moment when you try to stop but your right foot is clipped in and you find yourself lurching to the right. That slow motion feeling of "Crap, I'm going down. Noooooooooooo." Followed by the feeling of hitting the ground or, in my case, hitting the ground and then feeling the entire weight of your body slam your sternum into the blunt edge of your (straight) handlebars, now perpendicular to the ground.
My bike stabbed me. Or punched me, maybe. To say I had the wind knocked out of me doesn't do it justice. I gather from talking to medical experts my parents that the sternum is strong and it's unlikely that I'm bleeding internally, but that HURTS, yo. Pain. Both my knees are also purple and the right one is a little swollen, but the sternum - ow. Ow. Ow. 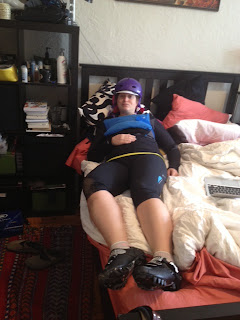 I iced it and took some painkillers until later I finally got some relief when I switched to beer. I mean, man has only been able to harness ice for the past hundred years or so. Painkillers, those are also new. Beer, now - that's medicine with thousands of years behind it.
A few notes: yes, my shoes clip into my "clipless" pedals. Or clip-in pedals. Whichever you prefer. The "clipless" part comes as an evolution from toe clips - these new pedals didn't have toe clips, see? They were clipless! My particular pedals are flat on one side and clippable on the other, so I can still use them with street shoes. But soon I'm sure I won't want to.

The best treatment for this level of misery is company. So, please, if you've ever wiped out on your bike, tell me about it? Also, anyone know what the chances are that I fractured my sternum?
Posted by T at 7:24 AM